Game a for z

If you’ve never played an MMO before, then you might go into Revelation Online and be absolutely amazed at the beautiful graphics and decent storytelling, but as a reviewer, I go into a game like this terrified of the grind that I’m going to encounter. Fortunately, MMOs in the eastern part of the world have been getting a little bit better in that regard. Revelation Online is definitely an Eastern MMO that deserves some recognition for a few reasons. First of all, it’s extremely nice looking, and the landscapes are actually pretty dynamic. As I walk through it, I’m kind of reminded of Everquest 2 with its far-reaching vistas and variable terrain. The best part was that it didn’t feel like a cookie cutter MMORPG – I didn’t feel as if I were locked onto a specific path. Maybe in the beginning, but the world is pretty open and explorable, so that’s a plus. As I dived into Revelation Online a bit more, I found plenty of cool features that definitely make it a more interesting experience than some of the other freebies out there.

Just like any other free MMO, this one really relies on the daily rewards and login duration gimmicks to keep you interested, but I have to say that the views in the game could keep you interested by themselves. You’re always going to wonder what’s across the next mountain or on top of that hill. Best of all, the game uses an aerial acrobatics system to challenge your ability to reach those heights. The world of Nuanor boasts a vibrant environment the likes of which you haven’t seen since Guild Wars 2, and the freedom of exploration is going to amaze you.

One of the most annoying things in any new MMO is getting equipment at a low level and having to browse through your inventory comparing stats. You can still do that if you want, but Revelation Online gives you a prompt when you get a superior piece of equipment so that you can switch with the push of a button. So you don’t have to stop in the middle of the field and rummage through your inventory to figure out whether or not you could have better stats. Eventually you’ll want to start looking closer at stats but in the early levels, the game is more than happy to hold your hand. As with any other MMO out there, the early game equipment becomes obsolete very quickly, so be prepared to swap out.

Let’s face it, apart from genre-defining games like Aion, most MMOs have kept us firmly rooted to the ground, even with the advent of flying mounts. Revelation Online really manages to bring it to a whole new level, however, by introducing aerial acrobatics. Your character is able to glide through the air and cover great distance using hotkeys that allow you to summersault through the air, glide, or even drop suddenly. It does a great job of giving it that anime feel that you’ve been longing for and kind of has a Blade & Soul feel to it but with a slightly more traditional interface, so it might just be a good in-between game.

I also found that there were some really cool skills, like the ability to run on water. There is little doubt that the game will be full of surprises for newcomers if you can get past some of the odd graphical anomalies such as the moon looking like a model INSIDE the sky sphere. There were also some audio glitches in dialogue, but nothing that is going to ruin the experience.

The game itself is pretty deep, though it’s a bit irritating that you have to wait until level 20 to join a guild. It cuts down on certain negative aspects of alt play, but it does make creating a new character tedious as you won’t be able to join your friends until you’ve leveled to 20. Fortunately, the leveling goes fast and you’ll be there before you know it if you have a few hours to sink into the early game. Also, you have to wait until level 15 to unlock crafting, but it’s available in your character window once ready.

Once you hit level 29, you can choose a path which will increase your attributes at certain increments. You can think of these as Alternate Advancement points of a similar variety to those you would earn in games like Everquest 2 or Age of Conan. As an Assassin, my first path unlock gave me +40 potential and an improvement to my magic attack. It might not seem like much, but it’s definitely a welcome boost.

Action MMOs are all the rage right now, but it is quite understandable that some might not be interested. The old control scheme is sometimes preferable, and this game does a fantastic job of combining both. You can easily set your control scheme to a mouse-driven action game, or you could stick with the old school hotkeys. The game is playable either way, paving a path for gamers from either school of thought.

I jumped into the game as an Assassin and it has plenty of cool new features, especially for those who enjoy that stealth gameplay. The Assassin in Revelation Online plays much like the Assassin from any other game in that it has several blade related abilities, including the option to poison your blade before engaging in combat with it. The class is primarily a physical melee DPS, but it does have some mid-range abilities. As you would expect, they wear light armor, have pretty extensive stealth capabilities, and are outstanding at crowd control. If you enjoy the support role, the assassin class is definitely for you.

If you were looking for a sandbox style adventure then you’re not going to find it here. The game is very story-driven and sometimes you’ll find yourself a bit frustrated when the subtitles barely match up with the spoken dialogue. Honestly, they should fix that, because if you’re going to have a story-driven MMORPG you should at the very least make sure that it matches up. In any case, it’s a pretty fun storyline to follow and the mechanics make it more interesting than other MMO fare. In addition to the story, the game features four factions, each with their own unique backstory and favor quests for each one. To put it quite simply, you aren’t going to run out of things to do anytime soon. 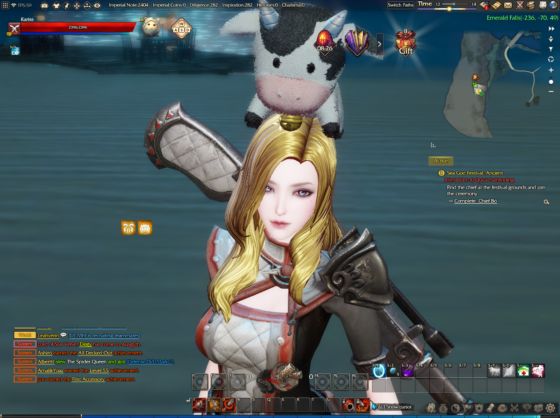 If you get tired of the story grind you can always jump into dungeons or extensive raids with other players. The variety of classes and the immersive mechanics make them much more exciting than anything you would experience in other games. The only problem is that you need to have quick reflexes and be ready to contribute more effort-wise than in other MMOs.

The game also features extensive PVP, featuring multiple modes including castle sieges. All in all, it’s a great experience even with the few technical hiccups that I found.

I’m going to admit here that without the aerial combat and the extensive sub-systems that make leveling more interesting, this game probably would have been as mundane as nearly every other F2P MMO out there. Fortunately, it is a pretty smooth experience, very responsive, and the interface is quite pretty.

When I was playing this game someone pointed out to me that the chat box was identical to Perfect World International’s and I pointed out that no, it was simply a clone of every other eastern MMO’s chat box. I stand by that statement but the rest of the game is pretty innovative. Perhaps the closest comparison would be Blade & Soul, which is another really good game in the F2P arena. All in all, the unique class abilities and the ability to switch between control schemes make this a pretty stand-out game.

I said it before and I’ll say it again: the game is pretty. It has an anime look and feel to it, so don’t go in expecting a highly realistic experience. Just enjoy it for what it is and have fun with the story.

Where value is concerned I’m going to have to drop the score down a bit due to the cash shop. Yes, I know that games have to charge SOMETHING to keep the lights on but the Aurum shop seems a little out of hand. It contains all manner of items from aesthetics all the way to progress scrolls that will give you a boost. The game is not necessarily pay to win, but spending money on boosts will make your life easier and as always, players who spend more money on the game are going to appear positively godlike. Don’t worry, you can still have tons of fun even if you don’t spend a dime.

I’m obviously a very big fan of this game and I’m going to be playing it quite often. It does manage to stand apart from the crowd by allowing you to take to the skies rather than forcing you to live a boring two-dimensional life on the ground, so that definitely earns it some points. I also want to point out that this is one of the few newer games that will actually run on a dual core processor, so it’s going to appeal to those who aren’t quite running state of the art machines. This might not be a game that you want to dump a ton of money into, but it’s definitely a good diversion when your main game is down.

-Character Creation can be Awkward

-Cash Shop is a Little Excessive

ABOUT US
Newspaper is your news, entertainment, music fashion website. We provide you with the latest breaking news and videos straight from the entertainment industry.
Contact us: contact@yoursite.com
FOLLOW US
© Newspaper WordPress Theme by TagDiv
MORE STORIES