Game a for z

tl;dr – Throne: Kingdoms at War is a strategy MMO from Plarium that rewards PvE play style more than PvP.

Throne: Kingdoms at War is a strategy game created and published by Plarium. It was released on August 2016 for the Android and iOS. A browser-based PC version has released on May 11, 2017.

Throne: Kingdoms at War is a strategy MMO with a focus of base building. You play as a lord in charge of a town in this game. You build buildings, hire troops and go out on the world map to conquer resources. The game is controlled solely via the mouse.

There are five primary resources which you have to gather: Food, Iron, Lumber, Stone and Silver. These resources are needed to build new structures and train troops. Each resource type has a certain resource producing building that generates that particular resource type: Farms for Food, Lumber Mill for Lumber, Mine for Iron, Quarry for Stone, and House for Silver. These can be built and upgraded multiple times for faster resource generation.

By building the barracks, you can train troops. There are multiple troop types in this game, each with their own pros and cons. For example, a cavalry unit is good against an archer but is horrible against a spearman. There is no strong generic unit. You will have to build a good mix of troop types.

Trained troops automatically defend against enemy player’s attacks. You can also use them to plunder other player’s town. But the most common use for these troops is to send them on an expedition to neutral structures on the overworld game map to gather resources.

You cannot permanently capture structures. Instead, your troops will march to the destination, attack and kill the defenders, load up/plunder the resources available, and then will return to your town. Battles in this game are automatically resolved.

The most surprising aspect of the Throne: Kingdoms at War review is discovering that the game is mostly PvE. This strategy MMO focuses on the base building part and very little on the combat part. In fact, you don’t have to worry about higher level players attacking your base because you get a penalty if you attack a town that’s five levels below you. You can mostly keep to yourself.

But if you are itching for PvP you can join an order and take part in guild combat. However, this is entirely unnecessary. 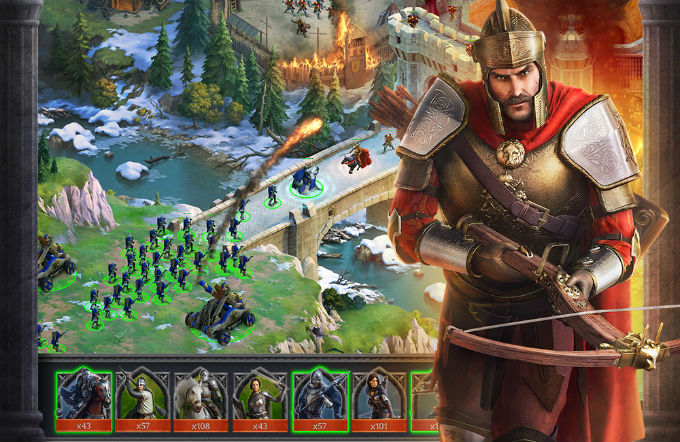 Throne: Kingdoms at War has beautiful crisp graphics. The game is 2D, with 3D graphics effects for eye candy. The UI too is well designed, isn’t casualised, and unlike most other browser game, is designed to be played at full screen. As a result, Throne, at first glance looks no different from strategy games like Civ or Crusader Kings.

Throne: Kingdoms at War is a browser game, and thus, requires no client downloads. There’s no need to install and download a multi-gig client. All you need to play Throne is a web browser with WebGL support. Fortunately, all major web browsers support WebGL, which means you can play this game practically anywhere.

But arguably the greatest aspect of Kingdoms at War is that you can play at your own pace. There’s no reason to attack other players. Troop losses in this game are permanent, and training replacement not only takes a lot of time, but they are also costly. As a result, plundering player towns isn’t as lucrative as capturing neutral structures. After all, neutral structures tend to be lightly defended with player towns tend to be heavily armed.

What this means is that you can relatively play the game in peace. Of course, you could still have a griefer/troll neighbor that loves attacking newbies. In that case, you could just move your town to some far away place. New players can relocate their town for free.

One of the bad things with Throne is that it is extremely uninspired. The setting is the most generic medieval setting around. Nothing is unique in Throne. The troop types are generic names. The buildings are generic. Heck, even the technology tree you research is generic. They could at least give some unique names for the technology like “Crop Rotation” for farming. But no, instead, the game’s technology tree consists of Farming Lvl 1-10, Logging Lvl 1-10, etc.

Yes, this game has a lot of pay-to-win aspects. The game has a premium currency, gold, which can be used to bypass practically every timer in the game. You can buy a building in gold, and it will instantly appear, bypassing any building time. Same with troops. Same with research. The game also constantly bombards you of “limited time” deals they have that are just for you.

Support is also non-existent. Even if you paid for stuff, they will either just ignore you, or give you vague sounding promises hoping you’d go away. Lose something because of a bug? They will silently fix the bug and won’t compensate for your lost item. Annoy them enough, and they might even ban you. This isn’t an isolated case; there’s a lot of complaints with Plarium regarding support.

All in all, Throne: Kingdoms of War isn’t a good game, but it isn’t really a bad game either. It’s just mediocre. The graphics are nice, and you can play it anywhere, yes. Unlike other “conquer the world” games, Kingdoms of War emphasizes PvE to grow over PvP. So while it has some serious P2W components, it doesn’t tend to affect free players as much as in other games.

ABOUT US
Newspaper is your news, entertainment, music fashion website. We provide you with the latest breaking news and videos straight from the entertainment industry.
Contact us: contact@yoursite.com
FOLLOW US
© Newspaper WordPress Theme by TagDiv
MORE STORIES